In case you haven’t heard, and you’re interested in Bible software (which means you probably have heard, but anyway), BibleWorks has ceased operations as of 15th June, except for supporting BW10 with compatibility updates. I’d like to commiserate with other users who will miss BibleWorks, and are now left with two main paid rivals for serious Bible study in the original languages, Accordance and Logos, along with alternatives like the free StepBible, which I like to use for quick student study tasks in the classroom, because it will do everything needed at that level, and students can take their understanding of the tool home and use it straight away without a major financial investment. But it is not sufficiently developed to act as the main Bible study tool for me, and I have been purely a BibleWorks user for about 18 years now, opting not to even venture into the Logos cosmopolis. Accordance is attractive to me, but became an option later in that it was originally tailored for the Apple universe, and I’ve dwelt in the Windows one. What I’ll miss most is having a package devoted to primary text study, rather than to the assembly of a suite of secondary resources that, I have observed, can often be overpriced in the two rivals’ offerings, or else sometimes represent resources that can be found cheaply or freely elsewhere. BibleWorks stuck to what it was good at, and though a little dated in appearance and involving a learning curve before its full power could be unleashed, is lean and lightning quick in its sweet spot of textual search functions.

So, where to from here? I can imagine that new, imaginative digital solutions will and probably already have appeared for serious biblical study. There are some nichy options, like the sophisticated analysis tool for the Hebrew Bible/Old Testament, Shebanq, and its associated HB/OT text analyzer, Bible online learner, which is fantastic for grammatical and syntactical analysis. For other such tools, see my Pinterest page on digital tools for Bible study and another focused on biblical Hebrew. Yet the Big Three were the main options for heavy-duty study in the original languages, and BibleWorks’ demise leaves the bulk of the field to Logos and Accordance. I will be keeping my BibleWorks 9 running as long as possible, having baulked at a US$200 upgrade for little else than insurance that I will get those compatibility updates, and then will eventually have to shell out for one of the others. I hope that’s ten years from now, at least. I’ve invested heavily in using the notes function of BibleWorks, to the level of a quasi-commentary on a lot of the chapters of the OT. But those notes files, despite their .bww extension, are simply rich text files, and easily cross-compatible, so they won’t be lost. For fellow BibleWorks users wanting to make the jump to either Logos or Accordance sooner rather than later, there is good, compact advice about this over on the Bible and Tech blog.

Following up from the previous post, which offered a link to a prezi on (postgraduate, and primarily text-oriented) research workflow, with a digital tool emphasis, here is a similar link to a prezi that compares Endnote and Zotero in particular, and notes the existence of an integrated word processor and reference manager tool called Comwriter. 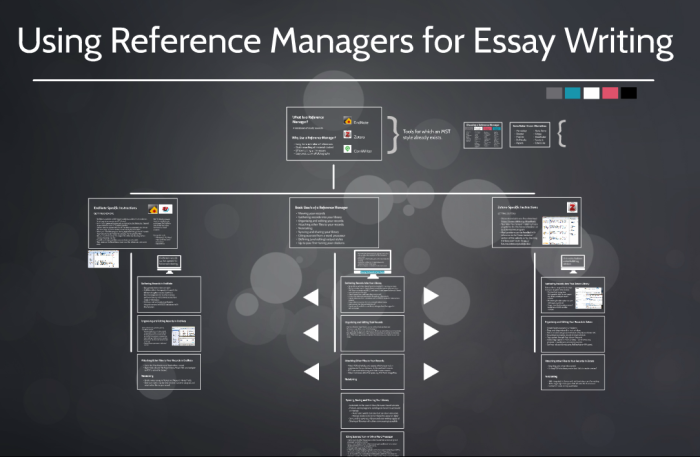 You’ll have to forgive the minority of instructions that are specific to our institution here in Australia, Melbourne School of Theology (MST), along with its parent accrediting body, the Australian College of Theology. The three resources treated here are those that feature our in-house citation style. Some other interesting ones include Mendeley, ReadCube, and Docear, which combines reference management and writing with a mindmapping function, though it isn’t easy to learn, in my opinion.

One point of interest in the prezi is a comparison of the relative advantages of Endnote v. Zotero, two of the most popular reference managers. In a word, Endnote has more power under the hood for large library management and mass-editing, and offers a lot more free space online, while Zotero is more user-friendly and versatile, with better notetaking, tabbing and linking of records, and of course, it’s free, even when you’re not a student. That’s hard to beat. More details in the prezi!

A few years ago I prepared a prezi to explain research workflow to students at our college, and I recently refreshed it for a seminar to some of our postgraduates. It really hints or suggests a workflow rather than fully explaining it, and it indicates some of the digital tools that may come in handy. The focus is on literary studies, in connection with my own more specific field of biblical studies. I offer the link to the prezi here again for those interested.

I have also revisited two main reference managers in recent times, Endnote and Zotero, comparing their virtues in their latest versions, so stay tuned and I’ll offer that prezi with my summary of their relative strengths, life permitting.