I have recently given a thorough browse to this attractive work from our college (Melbourne School of Theology) shelves. Let me tame my prolix (verbose (wordy)) ways and give you a few pros and cons:

Crysdale, Cynthia S. W, and Neil Ormerod. Creator God, Evolving World (Minneapolis: Fortress Press, 2013).
I didn’t really know what to expect from this book, which I picked off a bookshelf on spec about a year ago because it was of interest to me, and because I’m tight, more importantly, it was on the discount shelf. As so often the good stuff, that people ought to read but don’t, is. And I noticed that one of the authors, Neil Ormerod, is an Aussie, and teaches at the Australian Catholic University in Sydney, while Crysdale is based at the University of the South in Sewanee, Tennessee, USA. The perspective of the book is Catholic, with an appreciation for the deep tradition of Christian thought back through influential figures such as Thomas Aquinas, as well as what looks to me, as one not scientifically trained, like a solid feel for the sciences (e.g. biology, physics) as well as the philosophy of science. 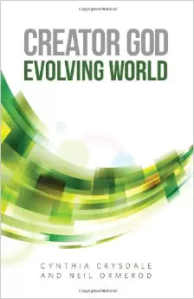 As the title suggests, biological evolution is taken for granted in this book, and for some evangelical readers that may be a deal-breaker. I personally see Neo-Darwinism as another knowledge paradigm, like so many composed by humans over the years to make sense of their world. One day it will give way to a replacement paradigm, though many of its composing elements will be carried over into whatever follows. So a further century or two of history will give its verdict on which parts of the Neo-Darwinian synthesis deserve to be retained and which ones are no longer persuasive. This means I find myself pretty relaxed about paradigms generally, and I find some evolutionary belief elements more persuasive than others. So it was not something that stopped me reading.